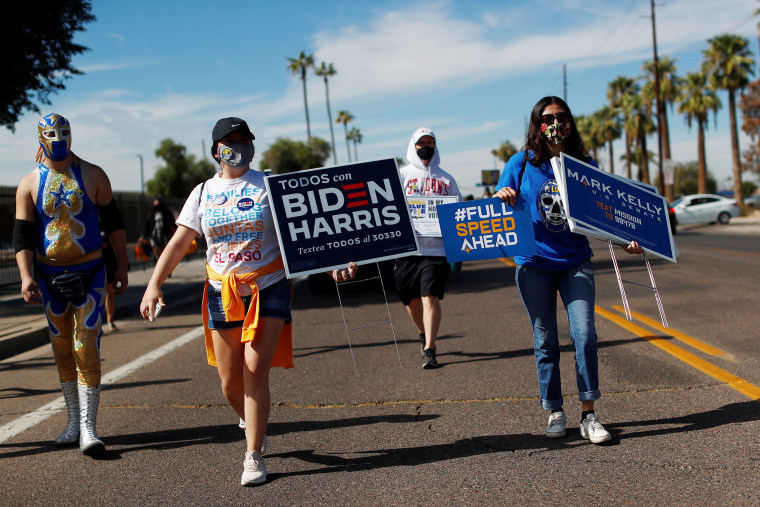 Tomas Robles was 12 years old when a police officer pulled up to his family, who had become stranded on their return home to Phoenix from a vacation across the border.

The officer didn't ask whether they needed help. He questioned his father about weapons and drugs and then forced his father to put his hands on the hood of a searing hot car, rummaged through their belongings without a warrant and left without assisting them.

Years later, in 2010, Arizona implemented one of the nation's strictest anti-immigration laws, SB 1070, which allowed police to racially profile people and question them about their citizenship and immigration status.

"2010 was like a powder keg for the state. The organizations that were built in response to SB 1070 ... would not exist without that law being passed," said Robles, co-executive director of Living United for Change, one of the organizations formed as a result of the law that helped mobilize Latinos politically. The group's acronym, LUCHA, means "fight" in Spanish.

Robles, 38, watched as the organizing that he and other young people immersed themselves in a decade ago had its biggest impact yet as the Republican-controlled state flipped Democratic this week, its voters choosing Joe Biden over President Donald Trump and voting for Democrat Mark Kelly for the Senate.

"This was 10 years in the making," said Robles, who started as LUCHA's executive director in 2013 with two employees. Today, with co-Executive Director Alejandra Gomez, he oversees offices in three counties and a staff of about 48.

In Arizona and Nevada, states with substantial Latino populations, Biden won the majorities of Latino voters, many of whom were propelled to the polls through established on-the-ground Latino organizing.

The Latino support from the two states opens up a new path to the White House through the Latino-rich Sunbelt states. The Latino populations in Nevada and Arizona, about 30 percent of the overall population in each state, are predominantly Mexican American.

Latinos are about 1 of every 5 voters in Arizona, and Biden got 63 percent of their votes, while Trump drew about a third, according to NBC News' analysis of exit polling.

The electorate grew from 2016, when it was about 15 percent, and Biden improved slightly on the performance of Hillary Clinton, who got 61 percent of Latino votes that year. Trump won Arizona by 80,000 votes in 2016.

In Nevada, where former Senate Democratic leader Harry Reid pulled out a tough re-election victory in 2010 by turning out Latino voters, Trump improved his share of Latino votes from 29 percent to 37 percent, according to exit polls, while Biden's performance of 56 percent was below Clinton's 60 percent in 2016.

Knocking on nearly half a million doors

Nevada's powerful Culinary Workers Union deployed door-to-door canvassers starting Aug. 1 — earlier than it has in previous years because of the pandemic. The union endorsed Biden.

Many of its 60,000 mostly Latino members work in the state's casinos, hotel and service industry and associated tourism, which was brought to a halt as Covid-19 case numbers rose and as workers were sickened and others were furloughed or let go.

The union's mobilizing machinery became key as the pandemic also pulled the plug on person-to-person contact with Latino voters and large campaign events for months — and as early polls showed soft enthusiasm for Biden among Latinos nationally.

Bethany Khan, the union's spokeswoman, said canvassers knocked on nearly half a million doors in Las Vegas and Reno and spoke to 40,000 Latino voters.

"Ever since Trump took office, he's been a threat to the livelihood of workers and our families," Khan said, adding that 54 union members or their family members have died from Covid-19 since March.

He pointed to Trump's telling Spanish-language voters that he was handling the pandemic and to his downplaying of its dangers.

"The Trump campaign spent a lot of money in Spanish-language media to divide and break off Latinos from Democrats, trying to divide families and just lying to Latinx voters," Murrieta said. "That wasn't met soon enough by the Joe Biden campaign. We had to pressure every campaign to do more."

'We go to the community'

Some of Biden's most active outreach to Latino voters ended up being in Arizona and Nevada. The campaign hired local Latino leaders and bilingual staff members who pushed his message in Spanish-language and Latino media.

Biden's first visit to Arizona was in October. He was more cautious about traveling and holding public events than Trump because of the coronavirus. Trump made several visits to the state, but he had to cancel one when he was hospitalized with Covid-19.

Robles said the Biden effort in Arizona was the most culturally competent engagement he'd seen from a presidential campaign. The campaign sent former Housing and Urban Development Secretary Julián Castro, the only major Latino presidential candidate in 2020, to Arizona and Nevada a few times to help rally Latino voters, once to preside at a lowrider-themed "Ridin' with Biden" event in Phoenix.

In Nevada, after being asked by the campaign for ideas to reach Latinos, Nevada state lawmaker Edgar Flores worked with others from east Las Vegas to organize a cabalgata, a parade on horseback that is traditional to the community. Video of the event went viral, and a second event was held.

"The Biden campaign knew that getting the Latino vote was going to be absolutely essential and came to me and said, 'What can we do?'" Flores said. "I said whatever we do, we go to the community. Nothing about this will work if you want our community to go somewhere else." He also insisted that the event amplify the community.

Liliana Trejo-Vanegas, 26, of Las Vegas, said her vote was more anti-Trump than pro-Biden. She, her mother, her father and her sister filled out mail-in ballots and dropped them off at polling locations because of Covid-19 concerns. Trejo-Vanegas, a freelance photographer who shoots weddings and events, lost work because of the pandemic. She said she felt that Trump disregarded the impact of the coronavirus on Latinos. Immigration policies were also important to Trejo-Vanegas. While she said she believed Biden could have done more for immigration reform as vice president, she said she felt that Trump's policies and rhetoric were "terrible."

"So I voted for the candidate that would most help my family and community, and Donald Trump is not it," she said.

But 37 percent of Nevada's Latino voters didn't agree with Trejo-Vanegas and cast their ballots for Trump. The share is an 8 percentage-point improvement on his showing in 2016.

Nevada was one of the hardest-hit states during the 2008 Great Recession, but like others, Latinos were experiencing better economic times before the Covid-19 pandemic, said Seaman, who said she is of Spanish and Mexican descent.

"Latinos and Hispanics want the same thing that everyone else wants," said Seaman, who is now on the Las Vegas City Council. "They want good jobs. They want to be able to put food on the table, good health care, good education, and they feel as though President Trump delivered that."

Similar to Republican-voting Latinos in other states, Seaman said the Nevada voters don't hold Trump responsible for the pandemic and see him as being able to pull the country through it.

'We educated the voters about their power'

Latino organizations hope the 2020 results will finally draw the investment and year-round interest in mobilizing Latino voters that many grassroots groups have been urging for years.

Aside from its longtime voter registration efforts, Mi Familia Vota spent $14 million on its #BastaTrump campaign (which translates to "Enough of Trump"), mobilizing Latinos through canvassing, digital platforms and television and radio ads in the two states, as well as California, Colorado, Florida, Michigan, Pennsylvania, Texas and Wisconsin.

"Organizations like ours, we built our relationships in this community, so we talk to them. They know they can trust us," Murrieta said. "This didn't happen because Democrats all of a sudden cared about our vote. We educated the voters about their power."